Marty burst into the office this morning with steam coming out of his ears – excited, relieved, and exhausted. He had just returned from “one of the hardest tests I have ever had to take”.

In the last two years, we have received many requests for aerial services, making us aware of this stark need more than ever before. In an effort to fill this vacancy, we purchased a drone last year and began using it to capture aerial imagery and video, unaware of the necessary requirements.

A phone call from an FAA officer quickly brought to our attention that in order to operate a drone, a full pilot’s license was required! We parked the drone and began examining our options. A full pilot’s license would require months of ground school and flying lessons. All adding up to $8,000-$10,000. Our only other option would be to apply for an exemption to Section 333 of the FAA’s Modernization and Reform Act of 2012. This would allow Marty to legally fly his drone commercially, but hiring a licensed pilot would still be necessary.

We applied for the exemption the following October and were told we should receive it within 6 weeks. Many delays occurred, and eventually the exemption fell through. It was looking like our drone may never take flight.

This past June, the FAA announced Section 107. Prior to this, there were few regulations that allowed the commercial operation of sUAS. Section 107 would provide safety regulations to allow anyone with remote pilot certification to commercially operate a drone. This new law was set to be in effect August 29.

The certification test approaches the knowledge required for a regular pilot’s license, but does not have the require the months of schooling, eliminating the financial burden. The test is compiled of 60 questions chosen randomly from a pool of 1,000. These questions cover every topic from weather conditions to classes of airspace.

And so the studying began! Marty immediately began studying and was determined to have his drone back in the air by September. Because of the previous lack of regulations, this was unchartered territory for everyone. But after months of hard work and late nights studying, Marty’s determination has finally paid off.

This morning, he entered the Murfreesboro Municipal Airport, one in a handful of hopeful sUAS pilots. At 10am they began their test, each armed with nothing more than a pencil, a protractor, and a blank sheet of paper. The test began with difficulty and each question proved itself more challenging than the last. After two grueling hours of hard work, the entire group passed! It looks like his drone will finally take flight once again.

With all that we’ve learned, we are prepared to once again begin offering our aerial services. Your safety is first and foremost, which is why every session begins with a pre-flight check. We examine the weather, aircraft, surroundings, and airspace to ensure everything is exactly as it should be. After the appropriate people are notified (local airports, neighbors, etc.) we are ready to begin shooting. Sessions begin September 6 and are now open for booking. Call Marty at 1 (615) 305-3071 to schedule a session! 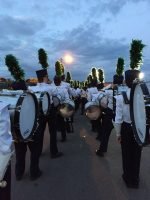